But the pandemic caused already changing voter habits to make tectonic shifts. People were switching from linear TV and plugging into streaming TV and online video viewing at an exponentially increasing rate.

All of this change was occurring at the same time as a historic election season. Votes, and the media views that would influence them, were more critical than ever.

The stakes had never been higher

A leading media agency in the US political space approached MiQ before the 2020 elections. They’d built TV and digital campaigns for presidential candidates and political groups focused on education, healthcare, and environmental issues, and they knew the 2020 election would be razor thin.

The results in the same critical battleground states that had previously decided the 2016 election would be the difference between victory and defeat for candidates down the ballot.

Tried-and-true wasn’t going to cut it. The agency needed a smart, data-driven, omnichannel approach to reaching voters. They had three objectives that, if successfully achieved, could mean the difference between victory and defeat.

A winning platform built on data

We leveraged our TV Intelligence media planning platform to deliver household-level viewership insights for the agency. The platform gathered cross-screen, delivery-agnostic TV viewership data from over 30m US households via our automatic content recognition (ACR) data partnerships, and connected it to 150+ other data feeds from across the digital ecosystem.

We analyzed connected data and found essential insights that would drive the campaign strategy.

We recommended campaign tactics based on the data delineated by state. For example, in Arizona, the agency’s TV plan had already reached 70% of households. But with the help of MiQ’s digital targeting strategies, they increased the incremental household reach of their candidate’s campaign by an additional 82,000 households, which could well have made the difference between winning or losing that state. 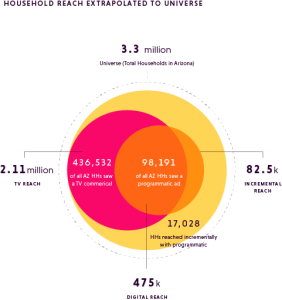 We conquested those same households with the candidate’s digital messaging at a frequency of 73 times, disrupting and countering the opponent’s narrative.

On Election Day, the proof was in the ballots. The agency helped secure victory for their candidate and secured a valuable partnership with MiQ.

As the US midterm elections approach and while streaming-centric viewing is increasing, now is the time to rethink your political advertising media strategy. Check out our report, The Political Media Remix: How digital can make political TV buys smarter, to learn how the television viewing landscape has changed and why political advertisers need to adopt a more targeted, data-driven approach, with a focus on digital and connected TV if they want to win races in 2022 and beyond.