Most pundits were left scratching their heads when shares of GameStop, a struggling electronics retailer, skyrocketed by nearly 2000% in the past few days. The short version of the now well-documented story is that Wall Street investors, seeing Gamestop’s problems, shorted the majority of the company’s stock but small investors, following a trend started on an investing subreddit, began to buy and drive up interest for the stock. The resulting activity caused the price to rise to the point that it nearly drove the hedge fund Melvin Capital to bankruptcy when the firm was forced to cover their short positions.

While hedge fund managers were still tallying their losses, this army of small-time retail investors were already on to their next target, the struggling theater company, AMC. This series of ‘short squeezes’ caused significant consternation on Wall Street, triggering a wave of indignation over the idea of ‘outsider traders’ taking aggressive action against hedge funds seemingly at random.

It’s a compelling story to be sure. The intentionally impenetrable and rarified world of Wall Street trading has been upended by some scrappy internet randos, leading to hedge fund managers making angry tirades on CNBC about the need to write legislation to fix everything and congressional representatives weighing in.

The story has been trending all week which has driven an explosion of new interest among young and independent investors: interactions around investing on Twitter increased 600% over the last week and nearly 8m Twitter users weighed in on the situation over the last three days, more than 9x the number who tweeted about the 2019 stimulus package.

The Impact of COVID on retail investing

Last year, we did an extensive analysis of how consumer profiles changed from pre-COVID (Jan/Feb 2020) to mid-summer (July/August 2020). In doing so, we were able to cluster consumers into five key segments based on how their behavior changed due to the pandemic. While some segments focused on fitness and staying healthy and others spent all summer glued to their TVs, one segment – self-improvers – focused on learning and upskilling, with the most popular topics being business, finance, and investing.

Nearly one year later, just under a third (31%) of the self-improver segment are still active on financial sites and platforms, and are actively looking to put their new skills into practice. While older consumers in the segment (those aged 45+) were more likely to spend time learning about financial products and investing, younger people were more likely to actually take the risk and invest. This is particularly true when it comes to investing in cryptocurrency, where 18-34 year-olds are much more interested in taking part in the bull run on major currencies. People in the 35-44 age group, meanwhile, are more likely to be looking to invest savings that otherwise would have gone toward travel and holiday shopping, things like retirement accounts, registered savings plans and commodity trading.

Social media platforms weren’t only the only place where consumers discussed the Gamestop story. Potential investors also flocked to financial news domains to try to understand (and potentially capitalize on) the current scenario. Activity on financial news sites more than tripled compared to the average readership in December, with traffic up 367%. Activity on investing sites rose 57% in the US, while activity on stock trading apps increased worldwide as retail traders looked to get in on the action.

In addition to increased site visits, user engagement across finance and investing sites in the US and UK also doubled, with consumers going from an early January average of three to four pieces of content consumed per visit to an average of seven to eight over the last four days. Browsing on phones increased 1.7x, while activity on desktop and laptop PCs increased by 1.4x. On traditional TV, viewership for business news channels increased 32%, with similar increases for OTT-only and traditional linear households. 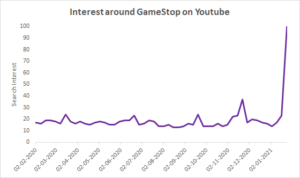 It’s also worth noting the demographic shifts at play here. Although baby boomers and other older consumers account for the lion’s share of activity on investment and finance sites, this influx of new interest and interaction comes primarily from younger, male-skewing investors aged 18-34. Contrary to what angry talking heads on financial news networks might have you believe, these are not low-income households investing their $600 checks. Rather, they are upper and middle class consumers: only 12% have an annual household income below $40k, and 37% have an annual household income over $100k. 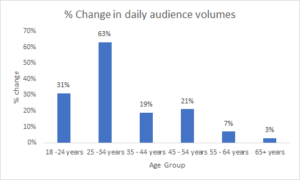 The fight over public perception 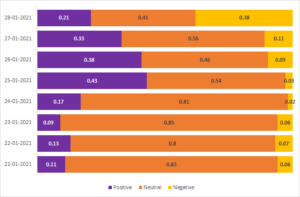 Sentiment on social networks around this week’s investing event has swung wildly over the past few days as networks and news sources have clashed with consumers over the narrative. Are the investors bored anarchists bent on wreaking havoc or heroes exposing Wall Street as a multi trillion dollar shell game? Others focused instead on the gains these investors made. Twenty-three of the top 100 tweets mentioned these returns, which ranged from 500% to over 2000%, a mention that is sure to fuel additional interest. Twenty-seven of the top 100 tweets included images, mostly memes about Redditors clowning on Wall Street.

While it’s almost impossible to predict where the market or this saga will go next, what we can say is that this new investing audience is just getting started. The success and publicity these ‘outsider traders’ have generated will spur other consumers, who are still spending more time at home, to consider picking up day-trading and investing as either a hobby or serious pursuit. For advertisers, this growing segment of more financially-savvy consumers is worth watching, and not just for financial product advertising. They’re likely to be more affluent and interested in further expanding their skill sets and learning new things. For more about our COVID clustering analysis, check out one of these reports: