March Madness is the perfect way to describe not only the basketball tournament but the excitement that sports fans are feeling now that live sports are truly back in action. With the ongoing March Madness tournament and the FIFA World Cup qualifiers, millions of American households are tuning back into their favorite sports this month.

The past two years of March Madness have been disappointing for marketers, coming off of the pandemic-driven break in 2020. So in 2021, when the drop in linear TV viewership was balanced by an increase in streaming viewership (85% increase in 2021 Vs 2019 season), marketers felt some excitement. And this trend seems to be continuing this year.

The championship game is right around the corner, so let’s explore how college basketball fans are engaging with the 2022 March Madness season so you can use these findings for all upcoming sporting events.

There were a lot of college basketball fans tuning in to the first two rounds of the March Madness championship. And by a lot we mean over nine million people watching per time slot. That’s a 12% increase over last year’s viewers and the highest viewership in the past five years.

Next, we took a look at viewership on weekends and were intrigued to find that engagement went up 21% compared to last year. Not only did more people tune in for the March Madness games this year, but the average engagement per session was also 13% higher. That’s equivalent to over 64 minutes a day looking at March Madness content.

Here’s the breakdown on how people watched: cord-cutters and cord trimmers on average watched nine games so far (excluding the final four and the championship game), while the linear households took in about seven games. 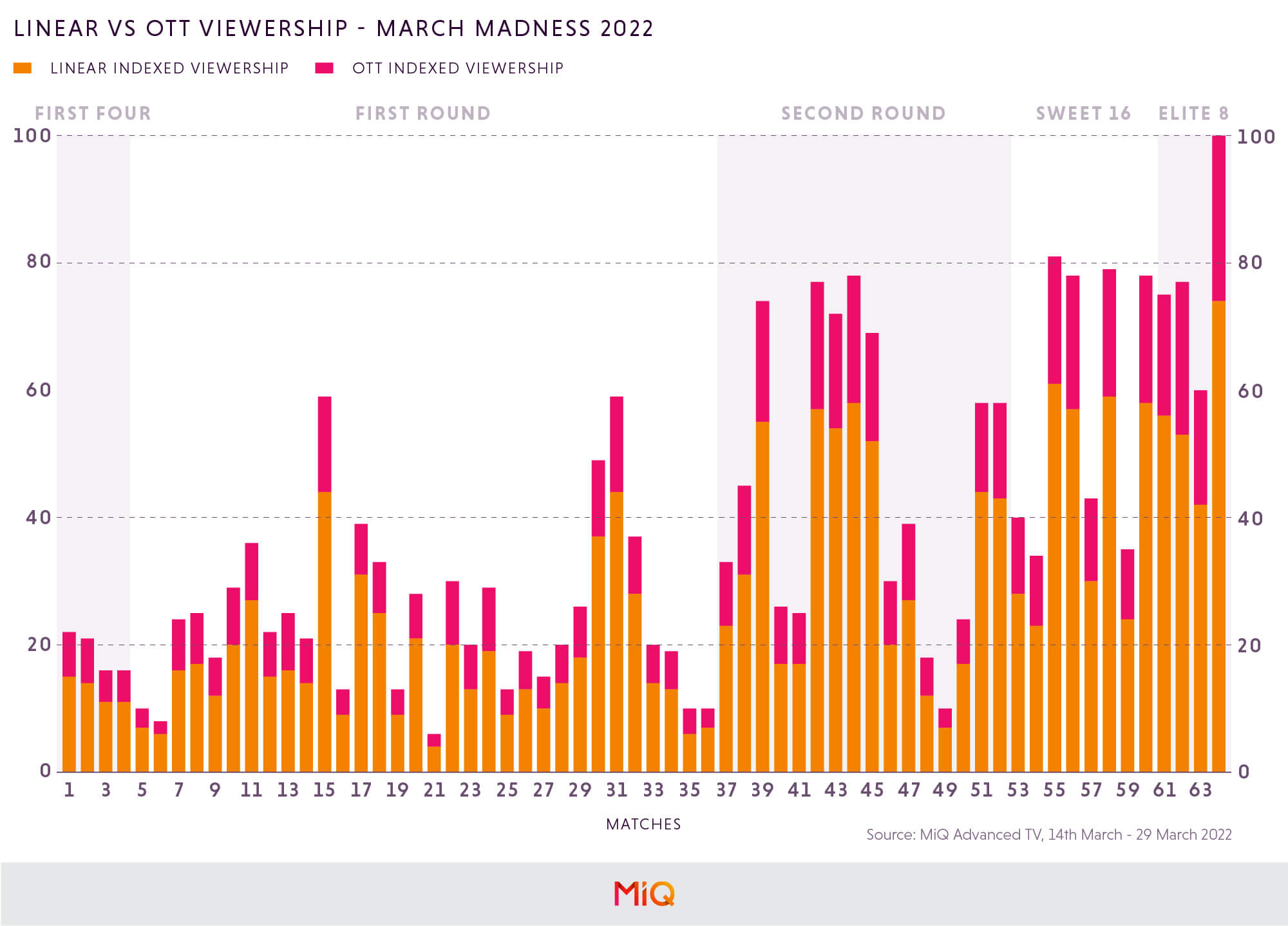 March Madness is not only men shooting hoops but women, too, The women’s March Madness tournament has a growing viewership this year, 15 percent increase over last year for  the first two rounds, according to ESPN. The second round averaged 474,000 viewers, which is a 25 percent increase over 2021. The trend further continued into the Sweet 16 and Elite 8 stages, with the viewership growing by 18% year on year.

We took a peek at who makes up the basketball watching audience and found the growth in viewership was made up of people in the 25-44 year age bracket, while the younger audiences watch the games via OTT platforms. 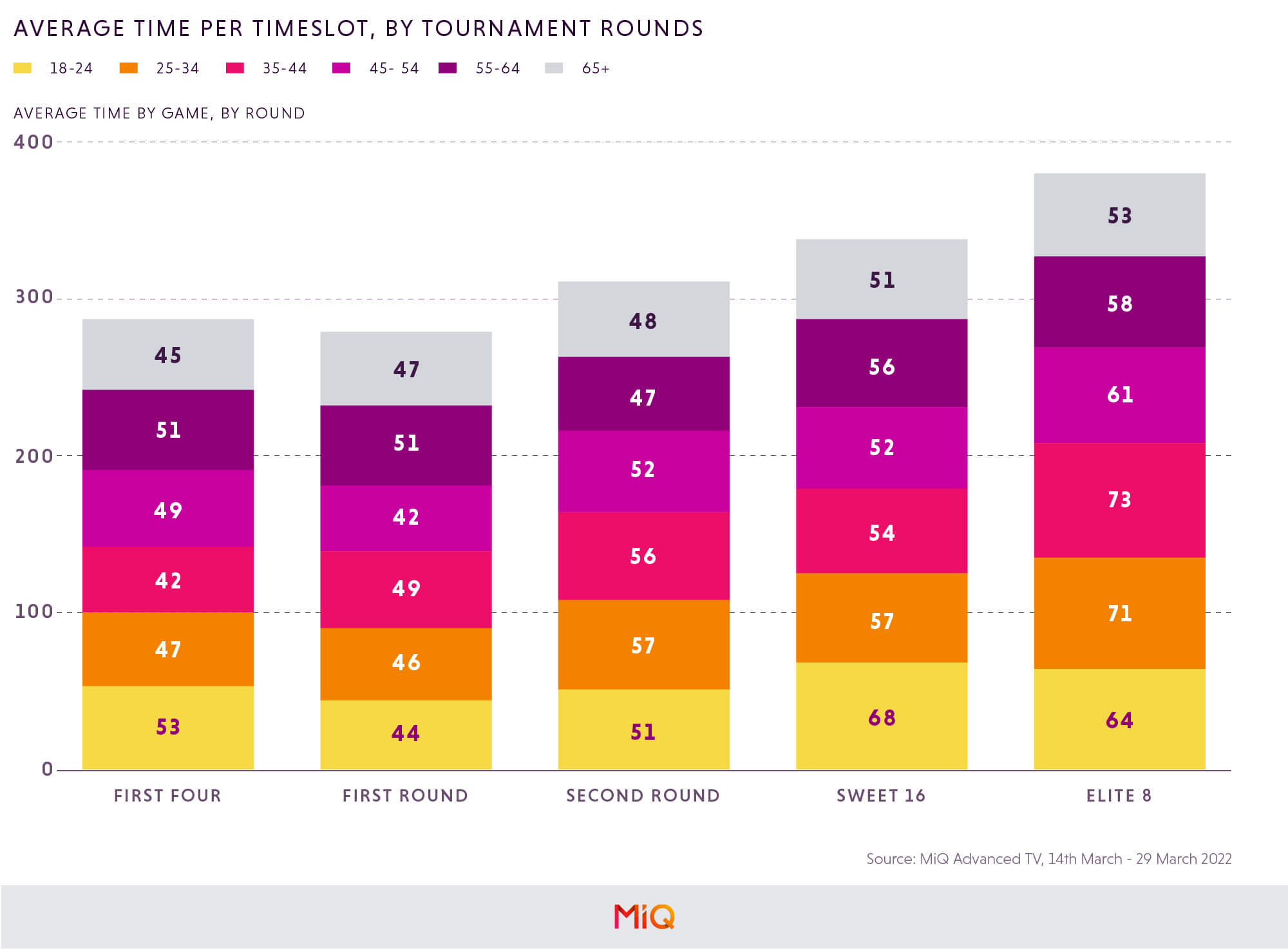 Basketball lovers are not only engaging with the tournament on their TVs. Records were set for cross-platform engagement during March Madness as evidenced by a 38% increase in  interactions with official NCAA social media handles The number of second-screen opportunities during the game also jumped by 19% compared to last year.

Here’s an example of the success of cross-platform engagement: During the live telecast of a March Madness game, one in five engagements were followed by a second screen opportunity where the viewers saw about seven ad impressions. A whopping 41% of the March Madness viewers browsed ad-addressable websites within an hour of watching the game, mostly looking at news sites with 59% of these second-screen opportunities appearing across mobile devices. 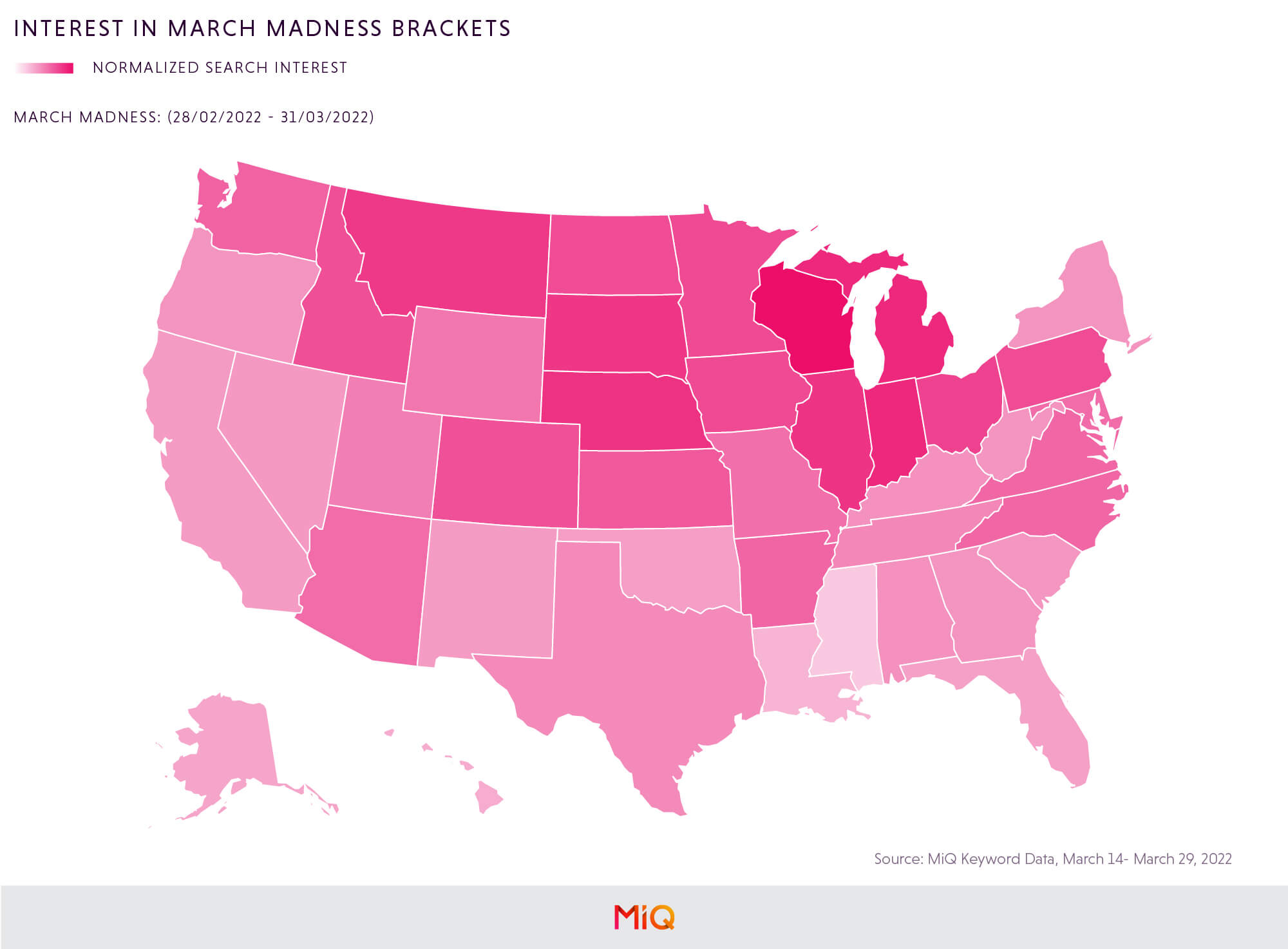 How does fantasy basketball and online March Madness bracket tie into the viewing of the games? Well, the interest in these sites jumped by over nine times since the start of the games and it’s 33% higher than last year. Although it is still 14% lower than the 2019 volume.

People interested in filling out brackets logged into websites to review and update their picks over four times during the course of the tournament. Most people made and updated their picks over the weekend and about 3% did research and explored general college basketball content before filling out the brackets. 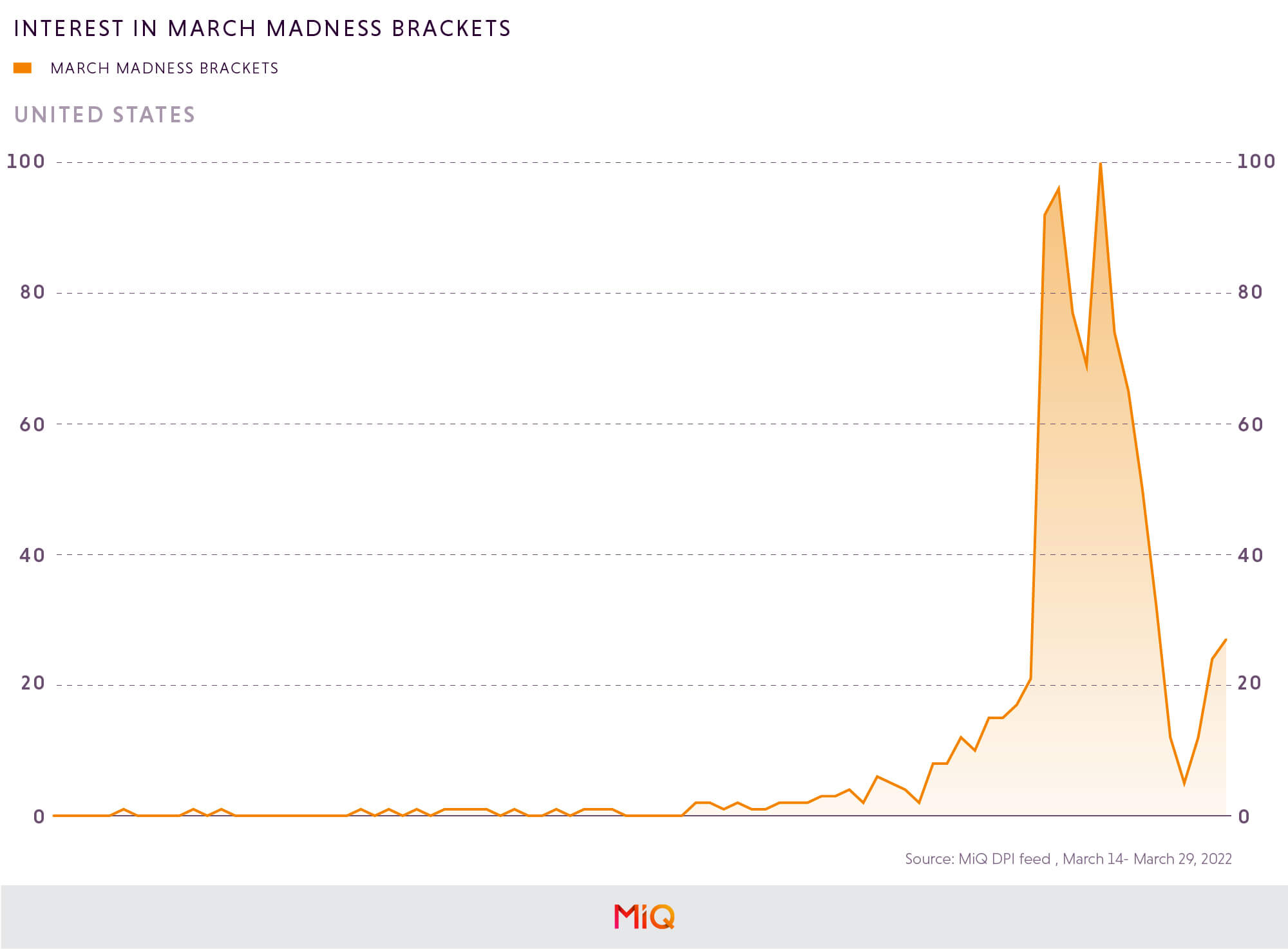 Who is bracket building?

Interest in the women’s bracket is about a tenth compared to the men’s bracket but we are seeing an increase in female fans with interest both in terms of viewership and those registering interest via online March Madness brackets.

March Madness fans aren’t only consuming basketball content online, they are active on news and arts-based domains on the weekends with 49% of the traffic coming from mobile.  Then there’s 11% of people picking up their gaming consoles over the weekend.

What’s all this mean for marketers? Major sporting events are back and so are the fans! So now is the time to understand who these fans really are and their behaviors. Brands should look into syncing campaigns during these events to maximize reach and relevance to accomplish their performance goals.

Looking for a partner to help you reach the right audience fast? Let’s talk.