Season 8 of Game of Thrones kicked off with a bang the other night, adding new viewers to its existing audience as 17.4 million viewers tuned in across multiple platforms to watch the premiere. It was the most-watched GoT episode ever.

With 11.8 million viewers watching the episode on linear TV, the season 8 premiere beat last season’s premiere and matched the Sopranos finale in viewers, and the total viewership numbers will increase this week as time-shifted viewing is taken into account.

Game of Thrones has been a massive driver of success for HBO over the years, with active subscriptions for the premium cable network’s app offerings tripling when GoT is airing. This was highlighted on Sunday night when a 2% drop in linear TV viewing for the premiere compared to two years ago was more than compensated for by a 97% increase in viewership in the HBO NOW app, which made the Sunday night premiere the biggest night on record for streaming activity in the app.

As a follow-up to our preview piece last week, we thought we’d dig back into the audiences invested in Westeros and how they responded to the return of the series.

Using TV data from Vizio, we identified 500,000 US households who tuned in to the Game of Thrones Season 8 premiere, with 73% watching more than 45 minutes of the episode’s 54-minute runtime. (We suspect many of them skipped the opening and ending credits, which was a shame, because the new intro sequence was great). Only 8% of the audience were what you might call “GoT-curious,” tuning in to watch 10 minutes or less of the episode.

While we were glued to our chairs for the entire runtime of the episode, there was plenty to lure viewers away: 61% of viewers changed the channel at least once during the season 8 premiere, although 83% came back within 10 seconds. The most common network’s viewers changed to were ESPN and ABC, proving that live content — in this case, MLB Baseball and American Idol (the NBA playoffs on TNT were also a big draw) — still draw attention for TV audiences as they flipped over to check on scores.

Not everyone is equally invested in the cast. Taking a deeper look, we can identify the moments during the premiere when viewers were most likely to change the channel for a quick hop to other content.

The most common channel change points during the Season 8 premiere:

Catching back up with our audience segments

In our last article, we broke the Game of Thrones audience up into three viewership segments: Lannisters, the die-hard fans whose allegiance to the show ran deepest, Targaryens, who were big fans of the show but a little less engaged, and Starks, the more casual fans who were less likely to follow the show for an entire season.

Regardless of segment, more than four out of five (81%) viewers who tuned in to recap content for season 8 tuned in to watch the linear broadcast of the Season 8 premiere. Of these, the Lannister and Targaryen segments were the most likely to watch the premiere in a linear fashion, with 87% and 69% tuning in, respectively.

By the end of the episode, almost five million tweets had been generated around the premiere, nearly matching the buzz for this year’s Super Bowl on game day. The Season 8 premiere was the most-tweeted episode in the show’s history and one of the most-discussed premieres of the decade. The show continues to trend as one of the top topics on Reddit, with more than one million interactions on the show’s fan page.

As the episode ended, GoT fans flocked to social media to trade fan theories, discuss easter eggs and callbacks, and review the episode, leading to three times more interactions after the season 8 premiere than the season 7 premiere two years prior. 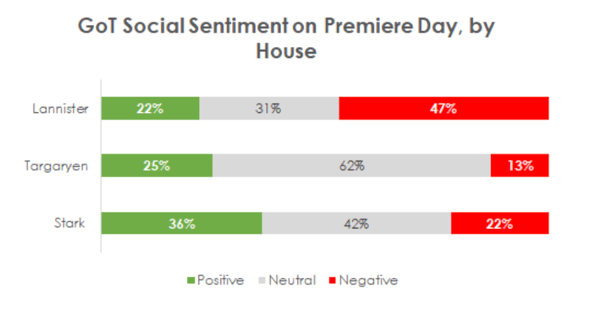 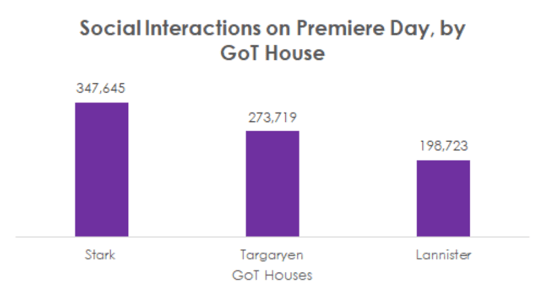 By house or faction, the Starks generated the most interest, nearly doubling Lannister-related interactions despite having a (roughly) even number of living family members to discuss. Jon Snow (Kit Harrington) continues to be the show’s fan-favorite and most-discussed on Twitter, followed closely by his aunt, Daenerys. The episode’s biggest boost was for Sam Tarly, Jon’s Nightwatch friend and ally, whose mentions rose 12x after he received the news that Jon’s new girlfriend had murdered his family, bringing him into the top-10 most-discussed. So he’s got that going for him, we guess.

Cersei continues to lead the list of characters being discussed in a negative light, followed by the Night King and Euron. Let’s just go back over that one more time: More people hate Cersei vocally online than the lord of the undead zombie legions coming to kill Westeros. Bronn also made a major jump in the social interactions (presumably people saying “oh shiiiit”) after his nudity- and revenge-filled scene with Qyburn. 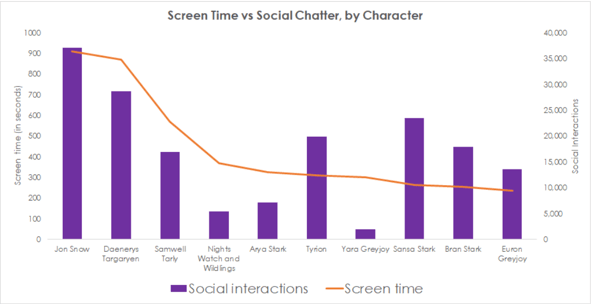 As winter cools things off for the characters, the action is heating up and as fans ourselves, we couldn’t be more excited to see where things go next.